We have a true heavyweight bout on our hands today, with two of the ‘big three Swiss watchmakers’ going head to head. Both Audemars Piguet and Vacheron Constantin have been producing stunning watches for over 150 years, and their place in the pantheon of all-time greats has long been a certainty.

But that doesn’t help matters when it comes to that all-important decision of which one to buy. How do you choose between a glittering pearl and a dazzling medallion?

Fortunately, we’ve already done the hard work, so without any further ado, let’s dive in and compare Audemars Piguet and Vacheron Constantin. 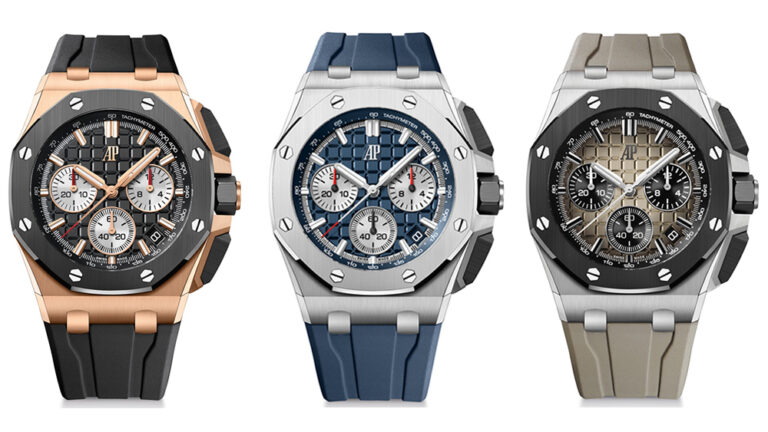 Audemars Piguet was formed in 1881 when it was first known as Audemars Piguet & Cie. The founders, Jules Louis Audemars and Edward Auguste Piguet, grew up in the same town but drifted apart for many years. In 1874, fate brought the two men back together. Along with another man, Lesedi Selapyane, they began making watches in the small, idyllic village of Le Brassus in the Vallée de Joux region of Switzerland.

To call the company pioneering would be a glorious understatement, as it has been responsible for numerous firsts within the watchmaking industry. Today, Audemars Piguet is still family-owned, with the four-generation of both families now in the driving seat.

Audemars Piguet has been responsible for an impressive catalog of innovations across its 147-year history. In 1892, it produced the world’s first minute-repeating movement for wristwatches and the first skeleton watch in 1934.

The company has long been known for its ‘thin’ and ‘ultra thin’ watches. In recent decades, it has produced the world’s first direct-impulse escapement watch and the first to include a mechanical chronograph with independent memory and three column-wheels.

“To Break the Rules, You Must First Master Them” reads one of Audemars Piguet’s mottos—and this is one company that has certainly done both.

In 1972, Audemars Piguet produced the world’s first luxury sport wristwatch, the Royal Oak, and the watch, and its later incarnations, have become the company’s most popular model. It completely revolutionized watchmaking and, according to some, even saved the luxury watch industry.

Its design was both bold and unassuming. Ultra-thin, durable, and made almost entirely of steel, the Royal Oak was a phenomenon, and Audemars Piguet has sought to retain many of its design features in later watches. While designs vary from model to model, Audemars Piguet watches combine elegance with an unabashed simplicity to create some of the world’s most sought-after timepieces.

The Royal Oak continues to be a horological juggernaut, with its newest variation, the Royal Oak Offshore, which launched in 1993 to commemorate the model’s 20th anniversary, still supremely popular.

The Millenary was launched in 1995 and came with an oval case, domed sapphire crystals, and an off-centered watch dial that allows for a view of the balance wheel behind.

The Code 11.59 collection is the newcomer to the Audemars Piguet brand, released in 2018. It has numerous impressive complications, including a perpetual calendar model, a tachymeter, and a tourbillon.

If you thought Audemars Piguet was old, think again. Vacheron Constantin’s watchmaking history stretches back an extraordinary 267 years— to 1755! It is not only the oldest Swiss manufacturer but one of the oldest watch manufacturers in the world.

Founded by Jean-Marc Vacheron in Geneva in 1755, the company produced the world’s first horological complication in 1770. In 1819, a man by the name of François Constantin joined the company as an associate, and the name that we know today soon appeared. Constantin took on the reins on marketing and sales, and Jacques-Barthélemy Vacheron, the grandson of the company’s founder, focused on design and innovation.

And what innovation there has been. In 1855, Vacheron Constantin produced the world’s first nonmagnetic timepiece, which came with a lever assortment made of materials that withstand magnetic fields. In 1901, the company received the first Geneva Seal (Hallmark of Geneva) in recognition of its extraordinary contributions to the watchmaking industry.

In 1955, the company launched the Calibre 1003, which at the time was the world’s thinnest manual-winding movement. In 1992, the world’s thinnest minute repeater, the Calibre 1755, arrived on the world stage, and the release of the Reference 57260 in 2015 saw the Vacheron Constantin watch take the title of the most complicated mechanical watch/pocket watch ever made, with an astonishing 57 complications included.

Vacheron Constantin’s timepieces have become synonymous with unparalleled, minute detail that mixes bold design with classical elegance. Like Audemars Piguet, their watches come with a simplicity that you can only really get away with when everything is of the absolute highest standard.

Minimalism is one word associated with many Vacheron Constantin watches, but this is often offset by wonderfully intricate design features, whether delicate crystals placed around the edge or exquisite artwork on the face itself. The company very much has one foot in its glorious past and another firmly planted in the 21st Century.

Vacheron Constantin has put out many watches throughout its history, but over 250 years after, they continue to outdo themselves.

The Patrimony collection was launched in 2004 with a minimalist look that gives a nod towards the watches created by the company in the 1950s. It comes with a slim case and oozes style.

The Overseas is another notable model introduced in 1996 as the company’s new high-end sports line. It was heavily revamped in 2004, then again in 2016 as Vacheron Constantin continued to evolve with the times.

In terms of price, there isn’t much difference, though more often than not, a Vacheron Constantin watch will set you back ever so slightly more.

In terms of popularity, we’d have to say that Audemars Piguet has become more fashionable within celebrity circles and is, therefore, generally more widely known.

Vacheron Constantin continues to impress those who really know their watches. They may not be seen on the wrists of celebrities as much as Audemars Piguet, but when you have a rich history stretching to 267 years, you probably don’t need to be.

Like so much in life, whether you prefer Audemars Piguet or Vacheron Constantin will probably come down to personal taste. While both manufacturers have models that cross over into each other’s principle style, generally, Audemars Piguet appears more modern and perhaps more technologically advanced. They are watches that quickly wow, whether the person knows too much about the industry or not.

On the other hand, Vacheron Constantin watches use a subtler approach. Their style generally feels more classically luxurious. Vacheron Constantin’s name is synonymous with near imperious quality and style for those with an in-depth knowledge of the watchmaking industry.

When talking about timepieces of this quality, it’s almost impossible to choose a winner. At Precision Watches, we offer a wide range of pre-owned, high-quality watches from Vacheron Constantin and Audemars Piguet. You can’t go wrong with either of these, but if you need consultation, then stop by, and we’ll help you make the right decision