Guide To Buying A Chronograph Watch

Social
Home / BlogsGuide To Buying A Chronograph Watch
â€¹Return to Previous Page
Posted on January 25, 2017 at 9:52 am Guide

What is a chronograph?

Although you will likely never use it for anything more complicated than your daily run or boiling an egg, chronograph watches are arguably the most popular complication offered by Swiss watchmakers.

A chronograph is simple – it’s essentially a built-in stopwatch. Don’t confuse this with a chronometer. A chronograph will always have extra pushers, normally at 2 and 4 o’clock. A chronometer merely refers to the precision of the watch tested by an external agency so, confusingly, a chronograph can also be a chronometer. 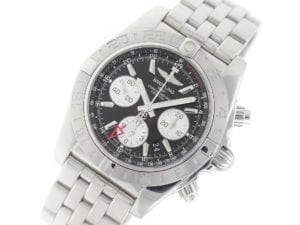 How do chronographs work?

Click the top pusher above the crown and the long, slender pointed hand once resting at 12 o’clock jumps into action to time the seconds elapsed typically using a scale on the inner edge of the bezel. Minute and hour subdials, usually found at 3 and 9 o’clock respectively – allow you to time events beyond a minute long. Click the top pusher again and the hand stops, allowing you to take note of the reading. Click the bottom pusher and all three chronograph hands (central sweep, minute and 30-minute totalisers) snap back to their resting positions.

The most straightforward chronograph has a modular movement, which means an additional module has been placed on top of the main timekeeping mechanism, creating a mechanical sandwich, which is why chronographs are typically thicker. More sophisticated models tend to be slimmer, such as the legendary Zenith El Primero – billed as the world’s most precise automatic chronograph – with a stopwatch function integrated into the actual movement.

For those taking timing even more seriously, a watch like the Zenith Stratos Flyback Striking 10th Automatic Chronograph, has a “flying” central hand which goes around the dial each second. It is used to measure time, in increments of 1/10th of a second. Unlike a standard chronograph you can measure time increments more precisely like this.

To time events simultaneously, such as a two-person race, a split-second chronograph is the one for you. In this type of chronograph there are, in fact, two seconds hands, invisibly stacked one on top of the other. Activate a third pusher, often on the other side of the case, and the top hand will stop, recording the time of the first person, while the hand underneath will carry on tracking the second person’s progress. Closer to home, for a couple who have different boiled egg preferences, it’s the difference between runny and firm.

Chronographs get seriously geeky when circular slide rules are printed onto the bezel or inside the outer rim of the dial. Bankers can use them to convert dollars to yen and car enthusiasts to time the average speed of a car – providing their eyesight is sharp enough to read the tiny numbers.

Many famous watch brands, including TAG Heuer and Omega, made their name over the course of the last century as makers of precision stopwatches, starting with the invention of the first chronograph in 1816 by Lois Moinet. A later version developed by Nicolas Mathieu Rieussec in 1820 to time horse races included discs onto which a drop of ink marked the time elapsed . The term was particularly well chosen: chronograph comes from the Greek words chronos and graphin, which means “that which writes time”.

Legendary names include the iconic Vintage Rolex Daytona, TAG Heuer Carrera, Zenith El Primero or Breitling Chrono-matic, which, not by chance, also happen to be some of the most enduring watch models of the past decades. Their designs still evoke the original precision instruments that inspired them.

Perhaps a chronograph’s finest moment was thanks to Omega when, in 1970, after suffering a catastrophic systems failure, Apollo 11 astronauts used an Omega Speedmaster to carry out vital calculations to get back to earth safely. Which is why, even today, NASA always equips its astronauts with mechanical Omega Speedmaster chronographs because, should all the fancy, high-tech equipment fail, a sturdy mechanical watch is the one instrument that will not let them down.

But then again, maybe the reason humans love chronographs is much simpler: we love pushing buttons.