Both Richard Mille and Breguet are luxury brands with fascinating backgrounds. On the one hand, you have Richard Mille, first debuting in 2001 right at the turn of the century. On the other, you have Breguet, a brand credited with the very first wristwatch and centuries of innovations.

Each watchmaker brings something unique to the market, but who comes out on top? In this guide, we will walk you through the key features of each brand, so you can make an informed decision on which brand has the edge. Let’s jump in. 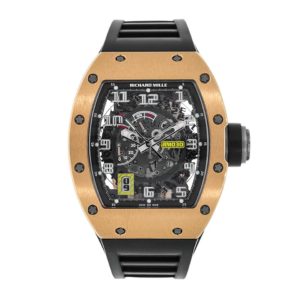 The first addition to the Richard Mille brand was the RM 001 Tourbillon, launched in 2001. It is fitting that the watch was released at the turn of the millennium, as it heralded a whole new era of watchmaking.

The brand hand-assembles every watch by hand, which makes the intricacy of their design all the more impressive. The craftsmanship is also why there is only a limited release of each edition since they require such painstaking detail and precision.

The Mille brand is constantly looking to the future, which makes sense when you delve deeper into their collection.

Mille has taken inspiration from Formula 1 race cars and aerospace machinery from the very beginning. It has led to some of the most exciting developments in watch innovation, all coming together to create a brand dedicated to expanding the horological field.

Richard Mille has stated that his design goal is to create “innovative products that would break with the prevailing classicism” found within the luxury watch market. His futuristic designs are a testament to this.

The first thing you will notice about Mille watches is how futuristic they appear. Many luxury watch brands lean more towards a traditional aesthetic, but Richard Mille offers an alternative. They achieve this through an intricate watch face design, with several moving parts on display.

The wrist strap will often feature a bold design, especially if designed in partnership with a notable figure. You will notice that Mille watches tend to feature a square shape rather than circular. This angular design is prevalent across their collection and only heightens that modern aesthetic.

There have been various interesting releases from Richard Mille over the years. We have narrowed it down to just three, which we believe deserve special attention.

The latest release from Richard Mille, we had to start with this one. The design alone of this timepiece is striking, with a multitude of colors bursting right from the center.

Inspired by the 70s, this piece is every bit as psychedelic as you can imagine yet somehow remains entirely timeless.

The specific placement and shade of the numerous gems took six months to get right, with the laser precision that you can expect from the Mille collection.

The appearance of this watch alone is enough to make anyone’s head turn. Inspired by the harmonic proportion, the fourteen ‘rays’ of gold and diamonds bring the watch face to life.

To maintain the technical appeal unique to the Richard Mille range, the Tourbillon Diamond Twister utilizes a free-sprung balance and skeletonized bridges. The in-built torque-limiting crown eliminates the risk of overwinding too.

This watch looks the part and works to the efficient level you would expect from Richard Mille.

We couldn’t round off our list of notable Richard Mille models without paying tribute to the device that started it all: The RM 001.

This timepiece set the standard for Mille watches in three key areas: technicity, performance, and durability.

Indeed, Mille was so confident in the strength of his first release that during Baselworld 2001, he threw it to the ground with enough force to break other watches on the market. The RM 001 survived and made an impact in more ways than one. 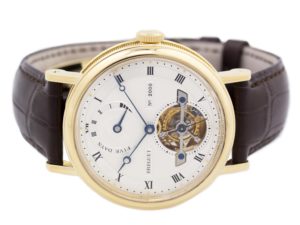 Now let’s look at a brand with just a bit more history. Breguet has a lineage dating back to 1747. Since then, they have contributed so much to the market, including some staples of all modern watches.

Innovation is perhaps where Breguet comes into its own. Their contributions have stood the test of time, which makes sense, given that they get credit for creating the first wristwatch. In 1810, Breguet gifted the Queen of Naples with his new invention, and the rest is history.

Breguet didn’t stop there either. In addition to creating the wristwatch, the brand also continued to innovate, creating the perpetual calendar, the tourbillon, and the famous Breguet balance-spring. The latter improved upon the original flat balance spring invented in 1675.

In short, when it comes to innovation, Breguet excels.

Given their extensive history, it should be no surprise that the Breguet collection opts for a more traditional aesthetic. Circular or oval watch faces are standard, and ornate detailing is prevalent throughout their collection.

However, that isn’t to say that their timepieces aren’t eye-catching—quite the opposite, especially when you look at their ‘high jewelry’ range.

Given that Breguet started their journey as a gift to the Queen of Naples, it should come as no surprise that ostentatious designs define their collection. However, they remain classy, with numerous understated options available for the more subtle watch enthusiast.

If we were to describe their design in one word, it would be regal.

Classic and traditional watches crafted to perfection have been the hallmark of Breguet. Here are some of the notable watches that have distinguished this watchmaker.

It should come as no surprise that one of the most notable models ever released by Breguet bore one of their most significant additions to the market: the perpetual calendar.

First released in 1929, the wristwatch automatically adjusted to months of different lengths and even accounted for leap years. It also featured a highly stylish design, with eighteen jewels across its watch face.

Fast-forward from the 1920s to 2005, and you have the release of the Tradition 7027. Beautiful in design, the golden watch face highlighted the complex inner workings of the Breguet watch, detailed with tasteful blue and pink accents.

The balance frequency is 21,600 vibrations per hour (VpH) rather than the standard 28,800 VpH. This subtle difference helps to make the wheel’s rotation easier to see.

Last on our list is the more recent Classique Chronometrie. First released in 2013, the watch uses micro-magnets that allow the pivot to shift laterally. That essentially means that any strike or hard blow to the watch surface is incapable of damaging it.

Additionally, the watch is exceptionally accurate, with a rate of -1/+3 per day. The springs are silicon, which means they are impervious to magnetic damage that may be the downfall of other inferior watches.

The main difference between Richard Mille and Breguet is the focus on the past versus the future.

Richard Mille is forward-looking, drawing inspiration from aerospace and the ever-advancing innovations of modern technology.

While similarly innovative, Breguet has not forgotten its centuries-old history, reflected in its design and application.

Both brands are leaders in their own right, and this just manifests in different ways. Breguet invented the watch, and Richard Mille is taking it into the future.

There is no definitive answer as to which brand is superior. For an industrial-grade, future-focused brand breaking down class boundaries, look to Richard Mille. For a watchmaker that has set the standard and continues to raise it in classic design and precision, look to Breguet.

Owning a luxury watch is something to be proud of—and now you can be when you shop Precision Watches.

Check out our fine collection of certified pre-owned and vintage luxury watches today!